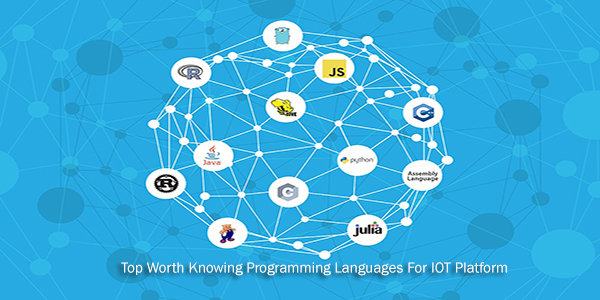 IOT platform  (Internet of Things) is improving life day to day and allowing control as well as monitor the behavior of equipment through devices. Hardware, sensors and various other communicational protocols are used in the development of IOT devices.The technology industry is developing day to day and putting the things to a single platform. Vendors are following various development approaches to delivering an IOT platform that requires, comprehensive knowledge of programming. Top worth knowing programming languages for IOT platform are enlisted below.

C is a technical language. If a programmer is writing code in C be sure it is reliable and scalable. It could be excellently used in the development of IOT devices because it enables the code reusability.C++ is a middle-level language commonly used by Linux developers. It is no doubt a good choice for IOT developers. It has also encouraged other programming languages including Python, Java etc.

Java is a programming language considered as the best choice the developers for IOT platform. Built-in capabilities of Java makes it portable and object oriented along with minimum hardware dependency.

Python is a language used to write web applications but it also has gained the attention of IOT developers from few years. It allows the development team build IOT applications.

JavaScript is a scripting language that was initially used just for the creation of web pages. It is good for event-driven applications that allow the devices to listen and response accordingly.These are the top worth programming languages used for IOT platform. IOT (Internet of Things) developers know that their development is transforming the world, therefore, they’re planning well to enhance the efforts. It is beyond the web or mobile application development.